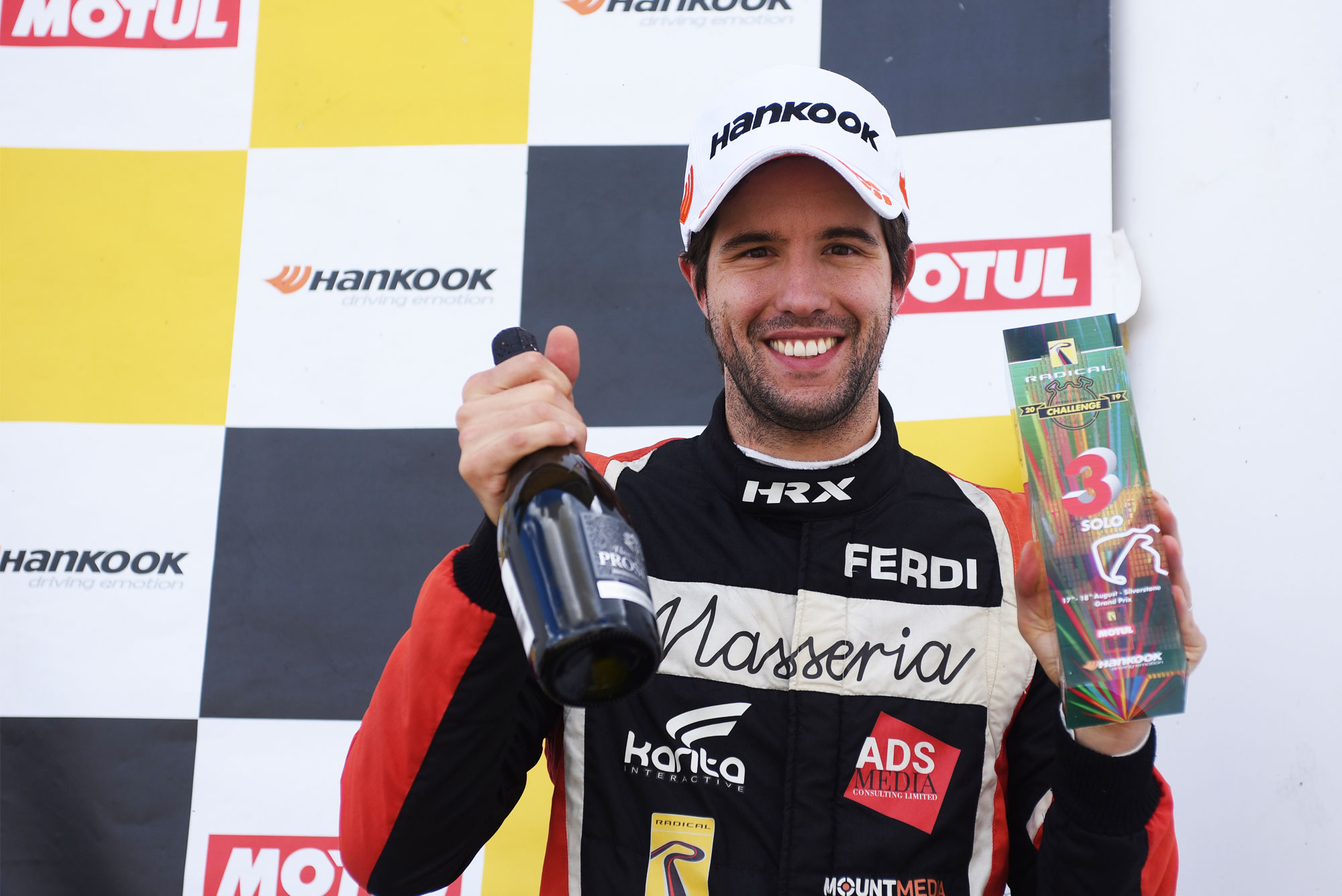 A win in the first race of the weekend and third in the finale on the Silverstone Grand Prix circuit, have kept 360 Racing’s Jerome De Sadeleer well in touch for his push towards the Radical UK Challenge title.

De Sadeleer qualified his Radical SR3 RSX on pole for the opening race and with team mate Mark Richards alongside, it was an all 360 front row.

It was a flying start for De Sadeleer too, quickly consolidating his lead, over defending champion and championship leader Dominik Jackson. “I had a good start but had to close the door on Dominik at Copse on the first lap to get away,” he said.

Richards had ben fourth early on, but succumbed to pressure from Joe Stables. “Our qualifying set up had been great with a bit of wet about, but no so effective in the dry. I had oversteer and spun it at Luffield,” he explained.

De Sadeleer pitted from a lead of 5.873 secs and once the stops had been completed, was back ahead and continued to dominate with over 15 seconds in hand over Jackson as he took the flag.

John Harrison also had a strong second half securing 10th on the last lap. Richards however had more dramas, “I tried to go around the outside of Mark Crader at Brooklands, we touched, he spun and rolled back into me,” he said after the race was red flagged.

Martin Verity and Jason Rishover both gained too in the closing laps, to finish 12th and 13th respectively. It was a disappointing race for Rishover however, “I had been in the top 10 in the first half but started to overheat and lost places,” he said.

Although De Sadeleer started the shorter race two from pole, he lost out to his rivals on the opening lap and spent most of his race chasing hard from fifth place. 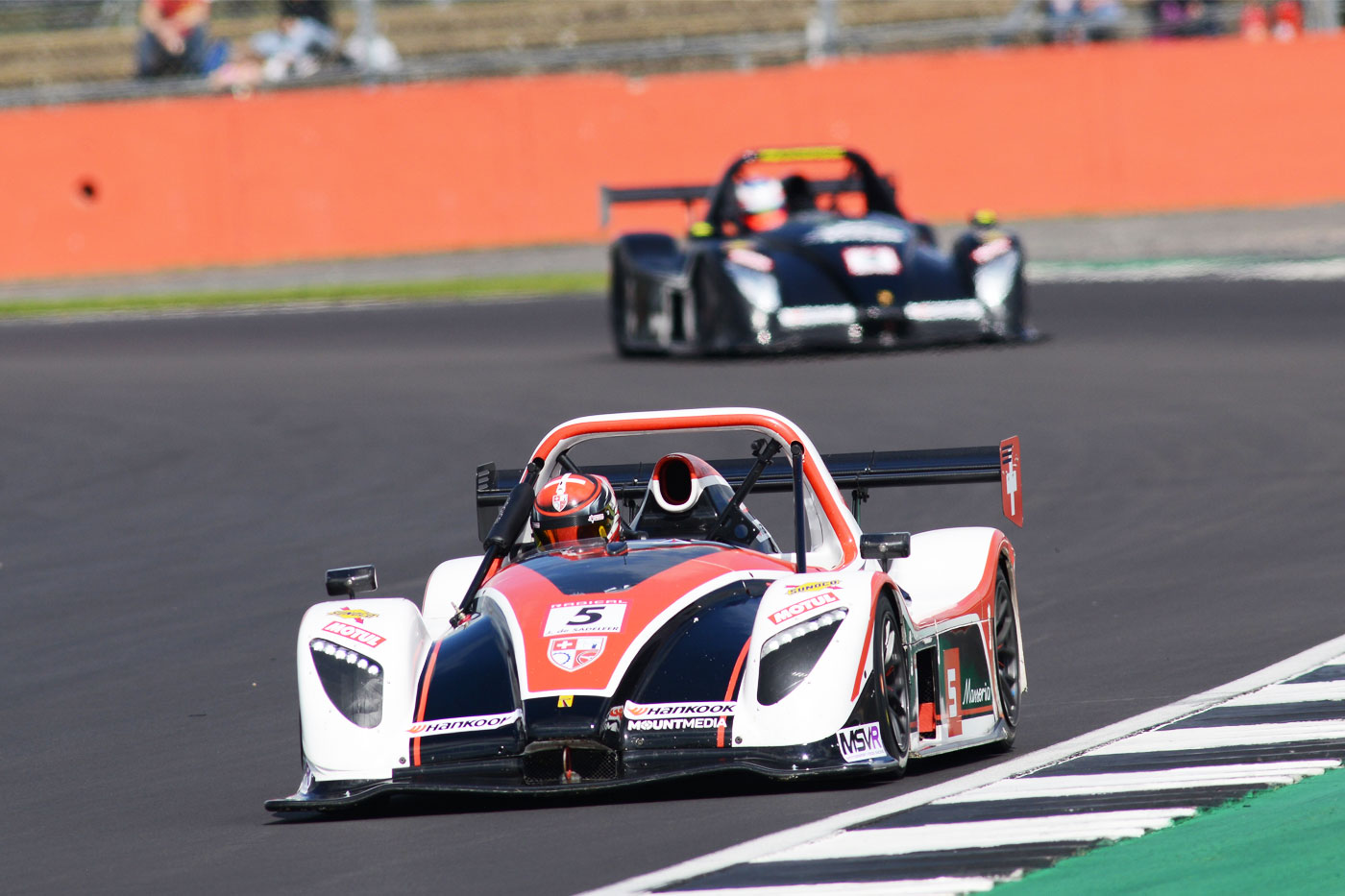 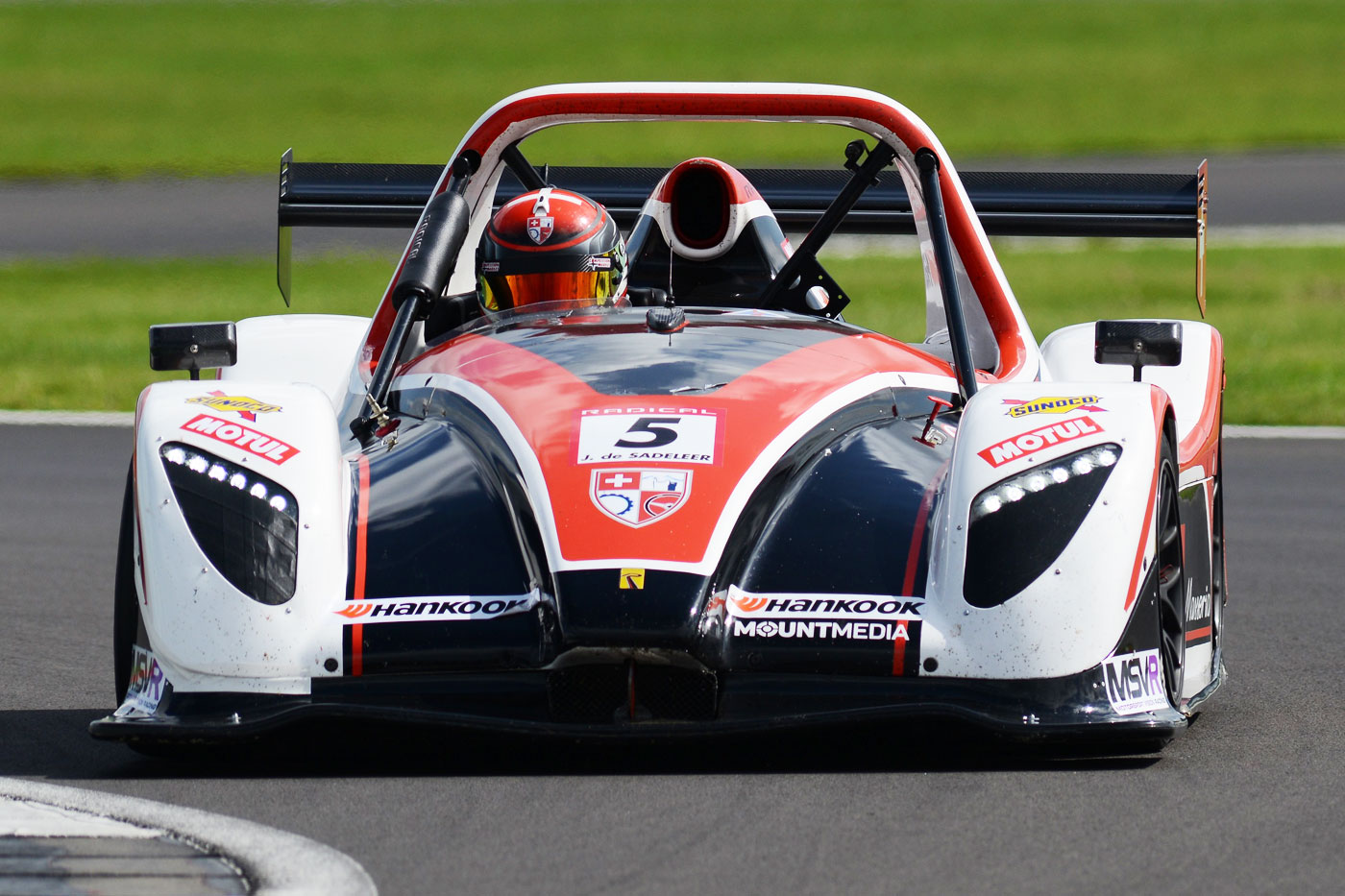 Richards was an early casualty having started from the pitlane, he clipped another car into the chicane. “He braked as I turned in and I was totally committed,” he explained after picking up frontal damage.

De Sadeleer had got ahead of Marcus Clutton on lap three, but couldn’t hold the place as they swapped back a lap later and hopes of another challenge fell away.

Verity had been in 10th from the opening lap, but was gradually reeled in by team mate Harrison, before the duo exchanged and retained 10th and 1ith to the flag.

Rishover had also been an early casualty, retiring after the opening lap. “As I turned into the Vale I got t boned and it smashed by rear upright after a great start and was challenging for top six,” he explained.

It was all to play for in the final race but De Sadeleer was back in third on the grid. He was down to fifth on the first lap, chasing race two winner Jac Constable.

Both had held station during the first half, but following the stops De Sadeleer had the hammer down, aided by a late safety car intervention. He had both Constable ad Jackson to target but was still fifth when they started the last lap, but succeeded in taking both in his final lap for a magnificent third. “The team had told me to stay calm, but then I got lucky when the safety car came out. Dominik and Jac were maybe battling a little too hard and I got them,” he added.

Richards had been ninth on the opening lap and had just moved up to eighth when he was forced to pit. “The diffuser strip broke and it couldn’t be fixed, so that was that,” he said.

Rishover had made time and places during his stop and after rejoining in 13th, he claimed ninth on the last lap at the expense of team mate Verity, while Harrison completed the 360 quartet in 14th. “I got Martin down the inside into Village, but had a little spin earlier,” Rishover admitted.