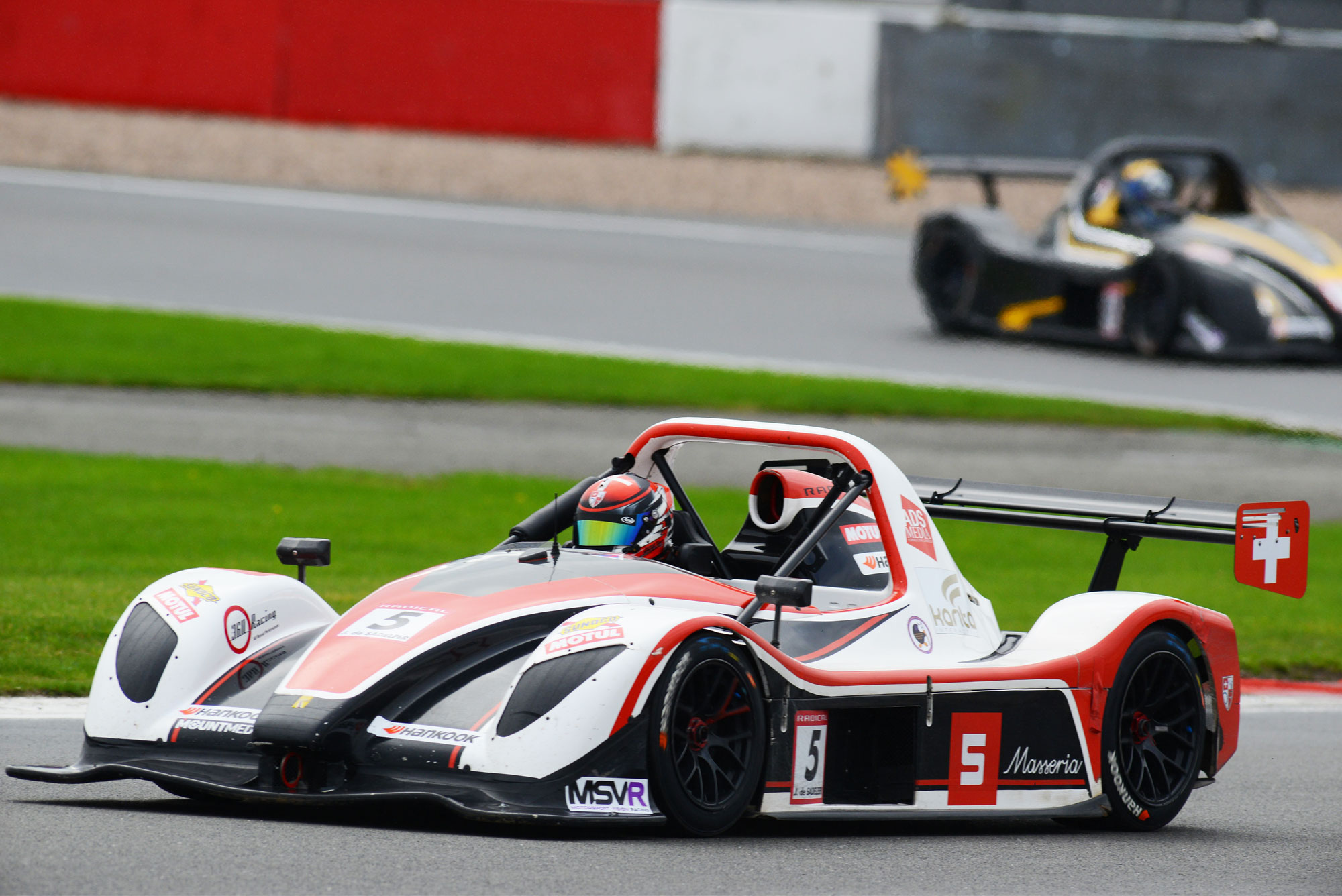 It was all going so well for 360 Racing Radical ace Jerome De Sadeleer at Donington Park; he had dominated the first race and finished the opening day with a two-point lead in the Radical Challenge.

He was dominant again in Sunday’s race until fate turned against him. “It had been a perfect race for me, I was second to first into Redgate and each time we had a safety car I rebuilt my lead and was fastest everywhere, but then everything we had worked for all year slipped way. It had been my best drive ever until that pitstop,” he said after the wheelnuts were stuck and more than doubled his time in the pits.

The weekend had started well with pole position for De Sadeleer. “I worked to build a gap but had to back out of some fast laps due to traffic. I’m happy with my time though,” he said.

Teammate Mark Richards had qualified on the third row too, “I overcooked it at McLeans on the last lap though, going for a last flyer. So frustrating,” he explained.

Martin Verity was happy on row six too, “a bit slippery though,” he reckoned. But Jason Rishover was destined to start from the back, “it just caught me out on the Craner Curves,” he explained.

As the lights went out, De Sadeleer was in command from the word go and left his rivals to dispute second.

Not even a safety car intervention when Richards went off could put the leader off his stride, making his mandatory stop with a huge lead. “I was on the grass at the Old Hairpin and then just threw it off at McLeans,” Richards admitted.

De Sadeleer re-joined behind his rivals but charged passed them again within a couple of laps to resume his dominant lead, taking the flag three seconds clear of Marcus Clutton, with title rival Dominik Jackson third. “I got them on the back straight, stayed on slicks and pushed hard,” he said.

Despite his earlier off, Richards clawed his way back to 16th, “It was awesome, I loved it! No pressure, just charging past people,” he said, after earning a stop-go penalty for speeding in the pitlane. 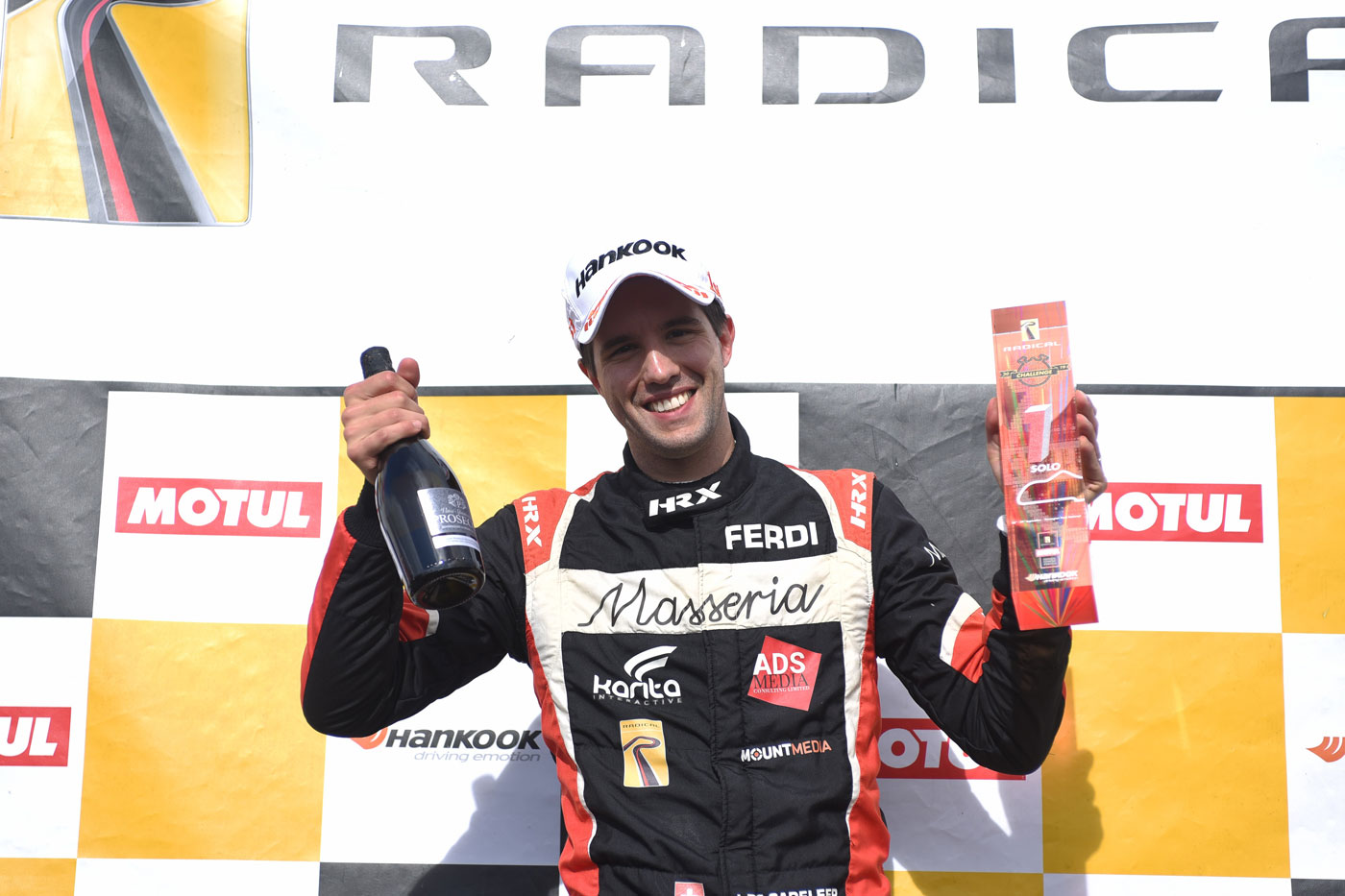 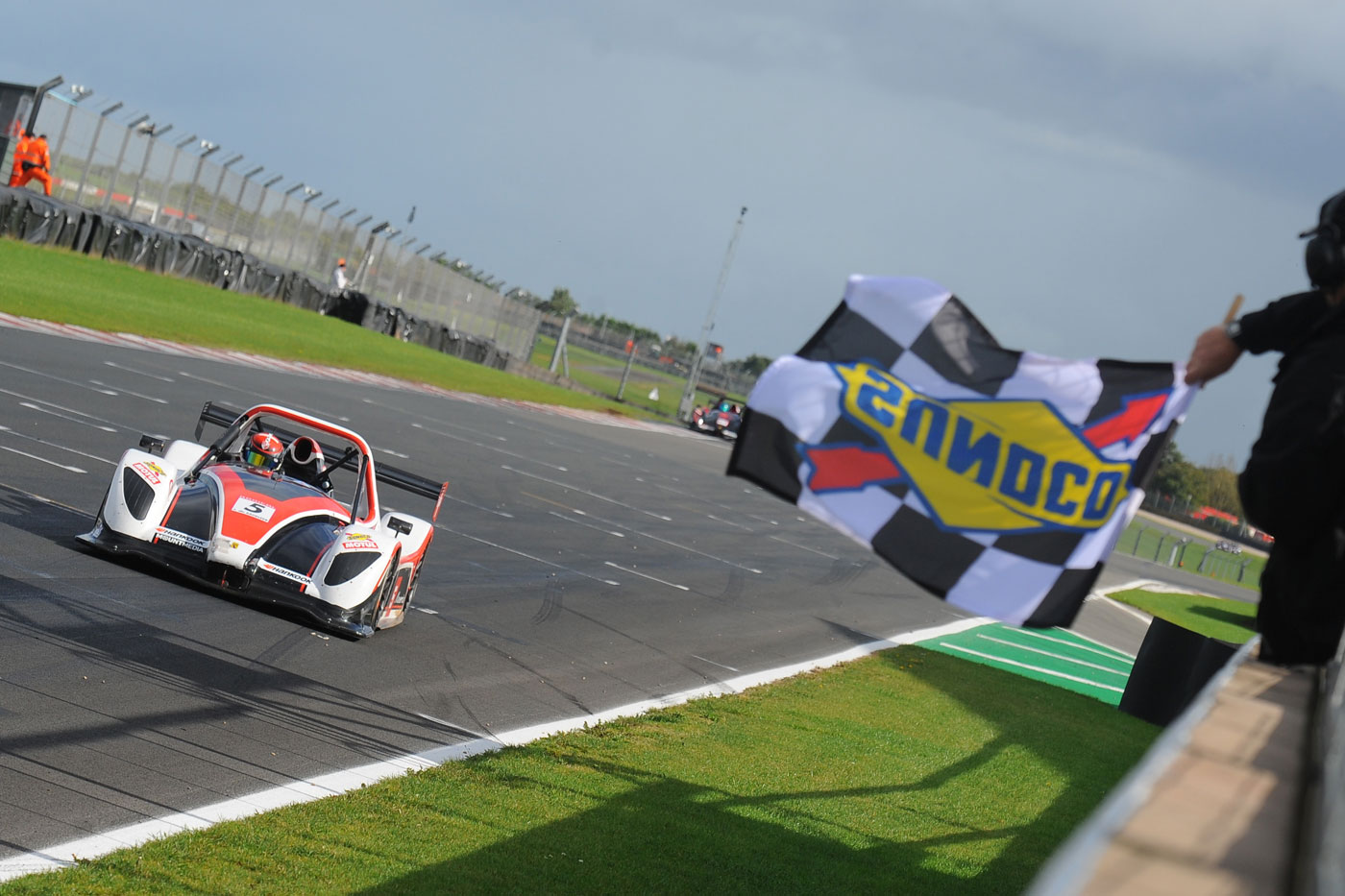 Rishover had made progress early on but then the tide turned. “I was charging and the safety car helped, but then came the rain. I changed to wets and it all turned sour,” he admitted after coming home 17th.

Verity had problems too, “I had a downshift problem and struggled for grip, so we had to make an extra stop,” he said after making home 20th.

It was Jackson’s turn to dominate the restarted second race, with De Sadeleer duelling for second with Jac Constable, until darting ahead on lap 10.

But Jackson suffered a catastrophic failure on his front right corner and crashed out at the Old Hairpin, leaving De Sadeleer first on the road, before a track limit penalty dropped him to second.

“I was lucky when I got on the grass exiting the chicane and thought it was all over and then set about chasing Jac,” he explained.

Richards and Rishover had both been first lap casualties, “I got rear ended at the first corner and then smashed by two more cars,” said Richards.

Verity made it home 11th however, despite having clutch problems. “It wouldn’t engage and left me on the grid for the start and restart,” he said.

So it was down to the title decider, De Sadeleer was totally in command as Jackson had to fight his way through from 15th on the grid.

De Sadeleer, Constable and Clutton were well clear up to the stops, but Jackson went in first, with De Sadeleer following two laps later.

As the rest of the field came and went, De Sadeleer was still stationery, with the crew trying everything they could find to shift the stubborn wheelnuts.

He re-joined a lap down, the win had gone but more importantly the title hopes had too.  “I know I had nothing to reproach myself about, it just happened,” said De Sadeleer, who after finishing third in last year’s championship, had to settle for second, having almost had one hand on the trophy.

Richards and Rishover once again ended their disappointing weekends with retirement, “I just binned it at the chicane,” Richards admitted. Verity did take it to the flag but extra stops and a penalty left him 17th. “I still enjoyed it though,” he admitted.

Although the disappointment of missing the title in such a cruel way lays heavy, both De Sadeleer and the 360 crew have had a great season with seven wins and the runner up spot in the Championship and will be back next year even stronger.