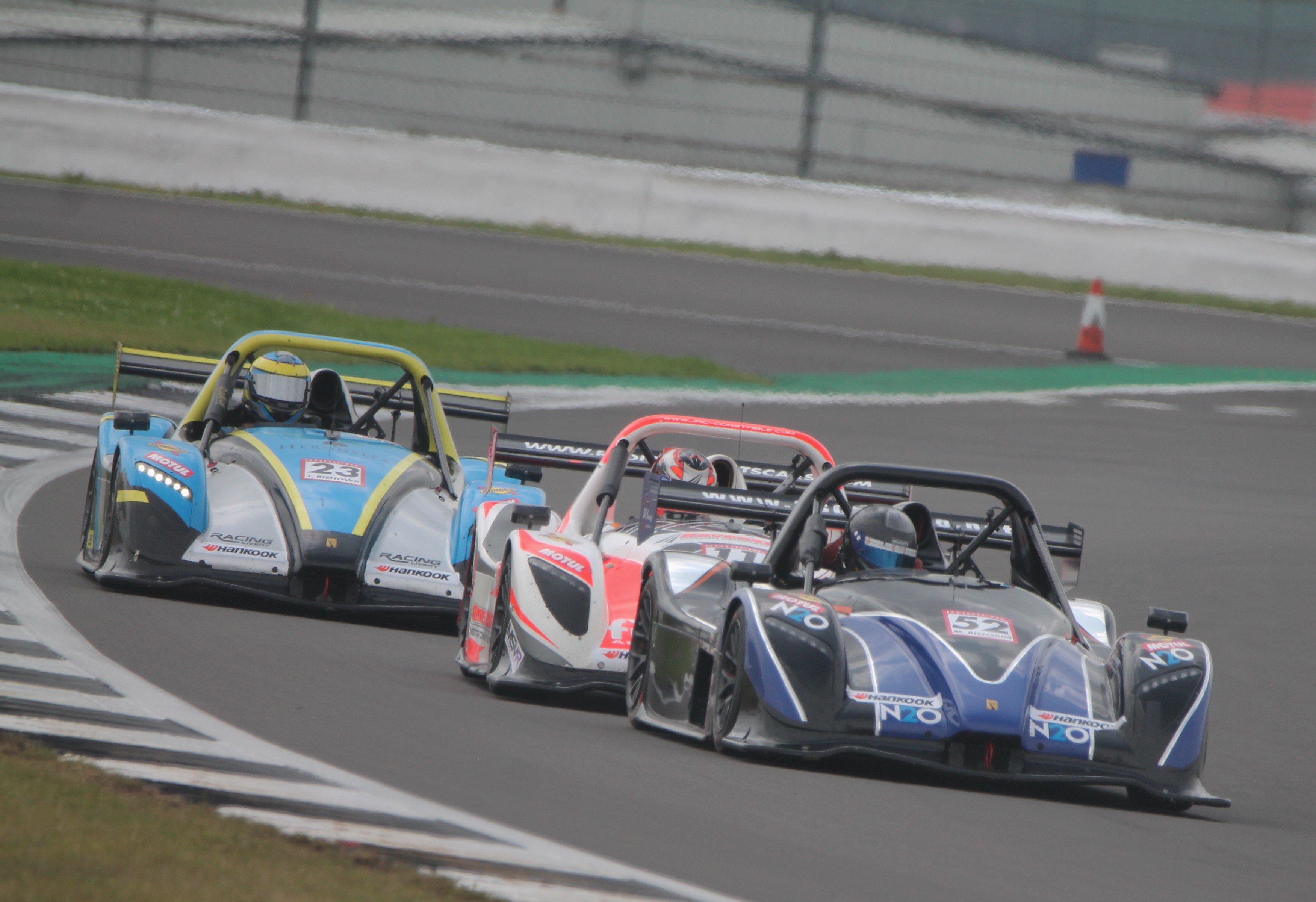 DE SADELEER & RICHARDS ON THE PODIUM

Although the 360 drivers missed out on pole position, they took three of the top four places on the grid. In second De Sadeleer was not feeling at his best. “I am not feeling energetic and that bothers me. I was first out too which was a mistake as I caught the slower SR1’s first, had to back off and push again,” he explained.

Richards was third quickest, “not a perfect lap, but a decent session and can’t complain about just being behind Jerome,” he said.

But Jason Rishover was delighted to be alongside Richards, “I felt confident running at the top end, the set up felt really good and I am feeling optimistic,” he said.

Peter Tyler and Martin Verity were also back in the 360 fold after missing Oulton Park.

As the opening race got underway, De Sadeleer chased Clutton through Becketts on the opening lap, with Rishover in third from Richards.

“I got mugged at the start, tried to go down Clutton’s inside and got cut off,” Richards explained.

Jac Constable got past Richards on the second lap and started to close on Rishover whilst De Sadeleer pushed hard to stay with the leader.

Rishover managed to consolidate his hold on third while Richards had a couple of exchanges with Shane Stoney for fifth. “We caught Constable too and then I lost ground passing back-markers before I had to back off as Constable and Stoney collided,” Richards explained.

De Sadeleer and Rishover pitted from second and third, with Richards unable to pass Chris Short again for fourth. 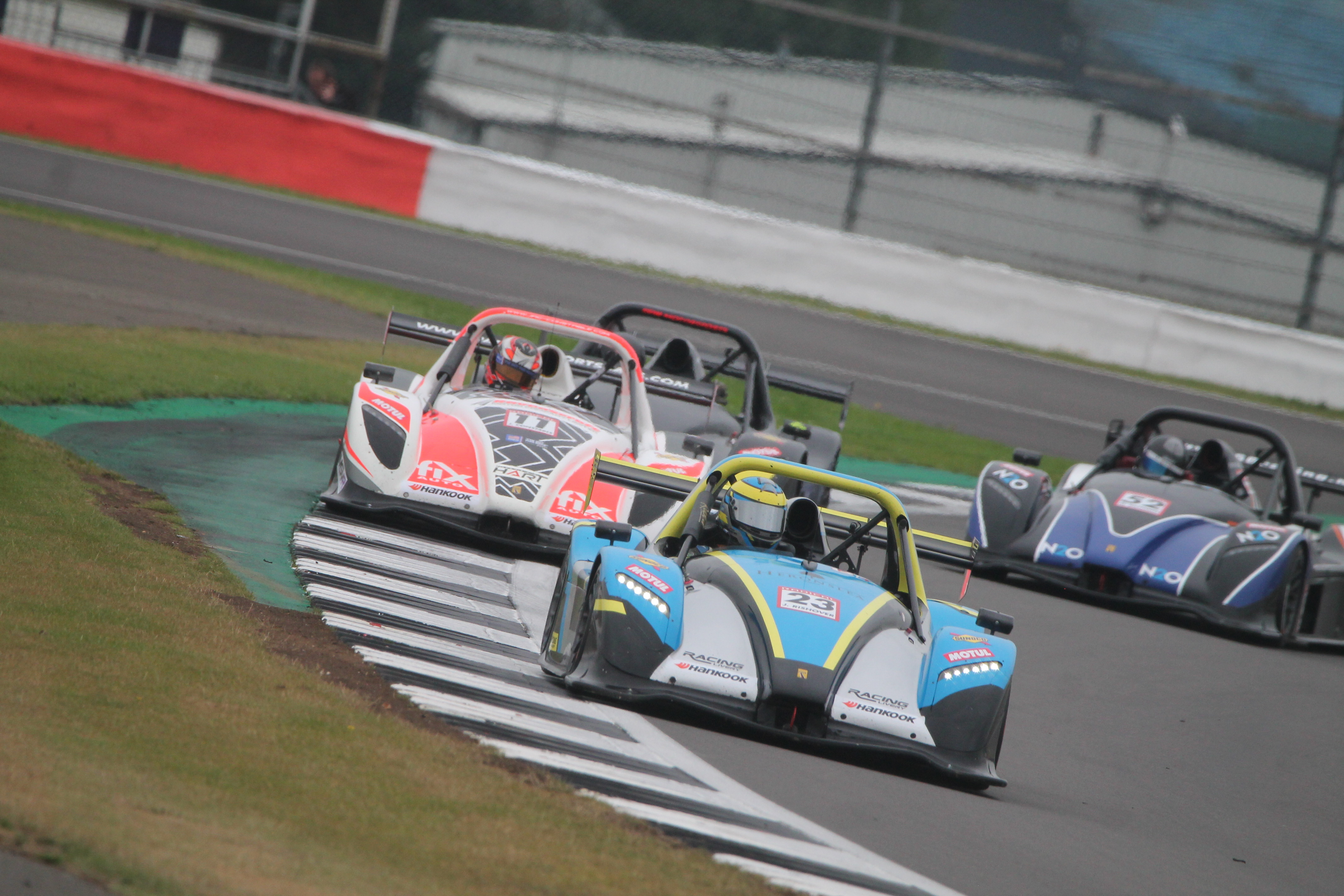 Following the stops De Sadeleer rejoined to secure a clear second, while Rishover managed to survive pressure from Richards for third until the 22nd lap. “After the stop I got caught up with back-markers and suddenly Mark was on me. It had felt good all that way in third though,” said Rishover.

“I pitted late and got out ahead of Short, then managed to outbrake Jason into Brooklands,” Richards added.

Tyler pipped John Macleod on the last lap to take 10th and Verity was 12th.

It was magnificent start for De Sadeleer in the shorter sprint race, leading the opening lap until the Aintree Hairpin. “I made a mistake and he got me, but after a super start I need to work harder to stay there,” he said.

Clutton had gone ahead around the outside, but De Sadeleer retook into Brooklands, only for a repeat move a lap later at Aintree handing Clutton the advantage again.

Richards and Rishover were in third and fourth again too on the opening lap, until Constable split them and began to attack Richards for third.

“I had some understeer and then got rear ended when he challenged me at the Vale,” Richards explained.

De Sadeleer retained his second place fairly comfortably, with Rishover a clear fourth. Richards managed to recover to secure a late 10th, with Tyler and Verity 12th and 13th.

It was another good start from De Sadeleer in the final race of the weekend, leading Clutton until lap eight, when they swapped into Brooklands.

Rishover lost his early third when Stoney and Tom Ashton got by on lap five, pitting from fifth. But Richards had pitted early from sixth with a paddleshift problem, “I was stuck in third gear,” he said.

Problems at the pitstop delayed De Sadeleer, but he still made it home a worthy third. Rishover was part of a three car battle for fifth until a spin at Becketts in the closing laps dropped him to 16th. “It just turned in on me and I spun,” he said after it was found to have been a bearing problem.

Verity had his best result of the weekend in eighth, with Tyler 11th.